Welcome to the brand new Rasa Blog. Here you can read about the latest news and recipes from Rasa Indonesia.

I am blogging new and existing recipes from our old Chicken Kitchen blog. 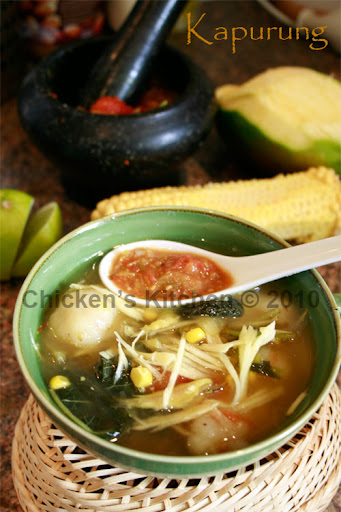 Kapurung traditionally well known in Luwu cuisine South Sulawesi. Apart from traditional sago processing, they also produce cocoa beans and coconuts. As a staple, sago comes as a main ingredient in cooking and baking.
One of the cuisine I know is Kapurung a simple sago soup where the sago balls formed by adding boiled water with rapid stir and two bamboo sticks to rolled on the mixture. Any green veggies such as callalo, chinese morning glory, long bean or green beans and corn kernels will flavoured the soup as well. The sour taste from young manggo and lime traditionally they use asam patikala a.k.a kecombrang( torch ginger, English).
The chilli sauce, I like to use lada katokkon ( habanero/ scotch bonnet pepper) together with tomatoes and shallots. All blanched.
For the sago balls I use African cassava flour( not tapioca flour), the flour color is creme not white as tapioca and taste better too.
The fish soup( pallumara), made from anchovy, turmeric, tamarind paste, ginger, lemon grass and fried shallots.

Bring to boil all ingredient.